You are here: Home > About Cervical Cancer

Cancer is a disease in which what used to be normal cells inside the body start to grow without control. Most of the times these cells don’t  behave normally and they’re functions are impaired. When this abnormal growing cells occur in the cervix, it’s called cervical cancer. The cervix is the lowest part of the uterus and it connects the vagina with the uterine cavity (womb).

It is well established that many demographic and socioeconomic factors, such as low socioeconomic class, low academic level, multiple sexual partners, sexual activity at a younger age, unprotected sex, and a high number of births per woman, all lead to a rise in the occurrence of the human papilloma virus (HPV) infection, which contributes to the development of invasive cervical cancer. In 99 percent of all cervical cancer cases, oncogenic genes (high-risk genes) for HPV have been identified. HPV infection is considered a precursor for the development of cervical cancer, particularly in the presence of other risk factors. Although the vast majority of HPV infections resolve spontaneously, some are persistent and eventually progress to precancerous and cancerous lesions. Better detection methods to identify lesions at an earlier stage, as well as the need for better and cheaper treatments are keys to reversing this cancer trend, particularly in rural communities. 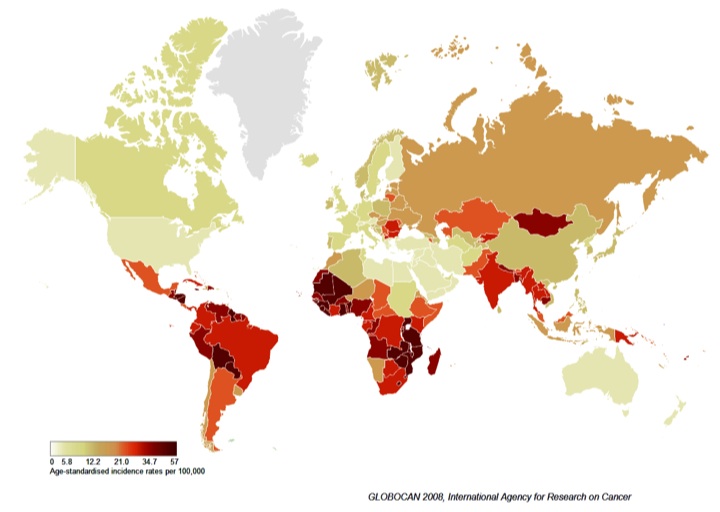 Classification of Pre-Cancerous and Cancerous Lesions

Cervical intraepithelial neoplasia (CIN), also known as cervical dysplasia and cervical interstitial neoplasia, is the potentially premalignant transformation and abnormal growth (dysplasia) of squamous cells on the surface of the cervix. CIN is not cancer, and is usually curable, but in some cases it will progress towards cancer in the span of around 7 years.

Depending on several factors such as the type of HPV and the location of the infection, CIN can start in any of three stages, and can either progress, or regress.