You are here: Home > J Roberto Trujillo is awarded with the Ohtli Recognition

On October 9th, Dr. Trujillo received the Ohtli Award, given to distinguished individuals who through their work have contributed to the betterment of our community and Mexicans living abroad.

The Ambassador of Mexico in the United States, Eduardo Medina Mora, today presented Dr. Roberto Trujillo with the Ohtli award, an award given to distinguished individuals who through their work have contributed to the betterment of our community and Mexicans living abroad. Dr. Trujillo is recognized for his outstanding work of over 25 years in the field of neuroscience.

In a ceremony held at the Cultural Institute of Mexico in Washington DC, Ambassador Medina Mora said that Dr. Trujillo represents the future of the Mexican-American community; people who take advantage of their dual nationality for personal growth and for the benefit of the North American region. Dr. Trujillo responded, “Receiving the Ohtli is an honor that reminds me that I have a social obligation, the award  represents the pride of being Mexican. When you work in this country and its institutions you are no longer just Roberto, you are a Mexican and you represent the country. If you do good deeds you open more doors for Mexico.”

From the State of Mexico, Dr. Trujillo is considered a leader in the promotion of biomedical research and biotechnology in Latin America, as well as a pioneer in the field of Molecular Neurovirology. In 1986, he began his studies at Baylor University School of Medicine in Houston, Texas and later became a Doctor of Science in Virology and Neuroscience at Harvard University. His research interests include the molecular basis of viruses, AIDS, viral-immune responses, opportunistic infections, and cancer. Dr. Trujillo has published over 60 scientific manuscripts and reviews and more than 50 conference abstracts and book chapters. Dr. Trujillo has received numerous awards, including: the National Research NIH Training Award; the Helena Rubinstein Award at Harvard University; the Ruth L. Kirschstein National Research Service Award, NIH; Pioneer in the field of Neurovirology in the Americas, Harvard Medical School; the Outstanding Professor of Neurovirology by the Pan-American Society of Neurology; the Outstanding Professional of Science in Mexico; and three times  the “Key of the City” in the States of Mexico besides having been recently named as one of “The 100 most Influential Mexican Professionals in the United States.” He is currently President and CEO of the biotechnology company TruBios and President of the Pan American Society of Neurovirology.

Othli, Nahuatl word meaning trail, is awarded by the Instituto de los Mexicanos en el Exterior to people who have dedicated most of their life and career to make way and clear the path for younger generations so that it become a relatively easier path to walk. This award consists of a medal, a rosette of silver and a diploma. 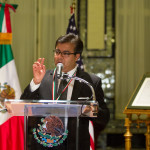 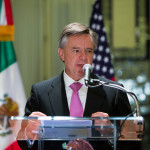 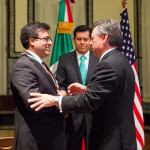 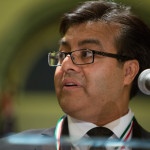 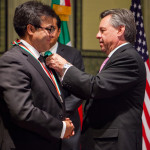 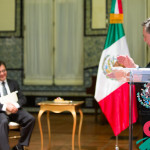 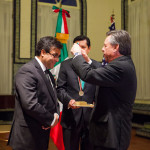